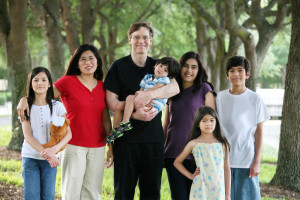 Big families are the happiest, while single dads struggle the most because they feel left out of their children’s lives, a five-year study of family life satisfaction has found.

Same-sex parents are the most resilient, have the highest self-esteem and the greatest social support of the eight family cohorts investigated by Edith Cowan University researcher Bronwyn Harman. Their satisfaction with their lives is only marginally less than that of parents with large families.

Dr Harman spent five years interviewing hundreds of parents from a range of family set-ups to ascertain what life is like for different families, and how resilience, social support and self-esteem contribute to parents’ happiness.

Participants filled out questionnaires that scored their resilience, perceived social support, self-esteem and life satisfaction. Dr Harman then ranked the different groups of parents based on their scores.

Parents with four or more children were the most satisfied with their lot, enjoying, rather than feeling overwhelmed by, the chaos of a big family.

Although they said they have to deal with comments such as “are they all yours?” or “do they all have the same father?”, large families benefit from lots of support from each other, and are rarely bored. Children learn responsibility from an early age, and older ones help out with their younger siblings.

“[The parents] usually say they always wanted a large family, it was planned that way, and it was a lifestyle they’d chosen,” Dr Harman said.

As the issue of gay marriage dominates political discussion, same-sex parents are also very happy with their lives, which Dr Harman attributes to greater social acceptance of lesbian, gay, bisexual and transgender people.

“As we move towards the idea of same-sex marriage as something we should have, the stigma around [same sex] parents is being reduced,” she said.

Same sex parents have battled against stigma and discrimination because of their sexuality, which has made them less concerned about public perceptions and the most resilient of parents.

“They have to go to a lot of effort to get these children, so these children are very, very much desired,” Dr Harman said. “Often when same-sex parents do have a child they feel like they’ve hit the jackpot because they didn’t think it was going to be possible because of their sexuality.”

Single fathers are the parents least satisfied with their lives because they feel like they’re perceived to be the lesser parent. They can be blocked from seeing their children, left out of the loop with communication about school and medical matters, and excluded from family celebrations. Single dads said they were often mistakenly viewed as the instigator of the family break up, and they struggle to get time off work to look after their children because “a good father is a breadwinner not a homemaker”.

“There is this perception that mothers are the real parents and fathers just sort of help,” Dr Harman said. “There is still no understanding in 2015 that fathers are co-parents that have just as much responsibility for kids.”

However single fathers whose children were now adults said it had been worth going through all the difficulties to maintain a strong relationship with their children.

Dr Harman said government services for families did not take into account that not all families were the same. “We need to remember that different groups of parents have different needs to contribute to their life satisfaction,” she said. “It would be much better if we were able to separate the needs of different families and tailor services towards those individual cohorts.”

Single dad: “I am broken and struggling with bitterness – and I struggle daily with the hurt”

Same-sex parents: “I feel more and more people are coming to realise that having same sex parents is not the worst a child could do in life”

Large families: “Our house is a joyful house. Our children all bring unique skills and personalities to our family”