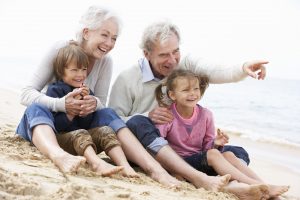 It’s been 18 months since Anne last saw her grandchildren.

“They’re never far from my mind, in any situation,” she says.

The Brisbane woman had a falling out with their mother, her daughter, when the children were just a couple of years old.

Since then, Anne’s daughter has barred her from seeing the kids.

“My family was very important to me … and I spent a lot of my life as a lot of mums do making sure it went well for my children. And to find now that there’s disrespect and [a] break down in communication is difficult,” Anne said.

It’s a situation faced by many grandparents around Australia, who are cut off from their grandchildren through divorce of the parents, custody issues, or estrangements from their own adult child.

It can be a harrowing experience, but there are legal options available.

Anne’s story is all too familiar to family law specialist Sandra Kelly.

She hosts information sessions on the subject to grandparents at local libraries in the Moreton Bay region, north of Brisbane.

She said the Family Law Act acknowledges the importance of children having a relationship with their grandparents.

Ms Kelly said grandparents could use the act to apply to court for orders that their grandchildren live with or spend time with them.

It can be done whether the parents of the children are together or separated.

“Often that’s one of the things that’s said to me at my information sessions is, ‘I didn’t know I could do anything, I didn’t know it was my place’. And they absolutely can.”

“The court recognises it’s vital for children to know where they come from.

“But pragmatically and practically it does require someone to take that quite aggressive step.”

Sandra said grandparents can make an application without having any prior contact [with the grandchild].

However, she said it could also be expensive and harrowing experience.

“I’ve had matters with grandparents that have gone to $90,000 to $100,000 in fees over five years where people have sold their boat … just everything,” she said.

Before a grandparent makes their own application to the court, they first must go through family dispute resolution conference or mediation.

“If you don’t get a resolution there, you can make an application to the court. Or you can try a couple of different attempts at family dispute resolution as well,” Ms Kelly said.

Ms Kelly said anyone needing legal advice could make an appointment with a family law solicitor, go to a legal community centre, or go to Legal Aid and see a solicitor.

What to do when mediation fails

Anne said she and her partner had tried mediation with their daughter through government-funded Relationships Australia, but it failed.

“We were given a certificate to say we’d tried for mediation, and that certificate was to last for 12 months as I recall if we wanted to go to court in that time,” she said.

After mediation failed, Anne said they chose not to go to court.

“We thought if we put our daughter through that process it’d be the last nail in the coffin if there was any hope of any reconciliation,” she said.

In addition to mediation they have written apologies, and sought out counselling for guidance on how to better relate to their daughter.

In this situation, Ms Kelly recommended trying again with a private mediator.

“It’s their training, it may be that it’s worth approaching a private mediator, asking them to send out an invitation. She may attend another interview and it could go differently for you.

“Private mediators … they’re not always lawyers but often they are and they’re family lawyers with lots of experience in that area.

“Solicitors engage private mediators all the time. You can also find them on online as well.

“There’s a lot of them around and they have very specific qualifications. And they’re very effective if you get a good one.”

She said it was worth seeking out a private mediator with a family dispute resolution practitioner qualification.

“They deal with children’s matters specifically … it’s an industry and university qualification.

She said it was also possible to try again through Relationships Australia with another mediator.

Another grandmother, Narelle, went through a similar situation to Anne.

But she’s come out the other end with a desirable outcome.

“My son separated from his partner [and] as a result of that the entire family was alienated. As a part of the court proceedings that my son was going through I put in a request for time and that was granted,” Narelle said.

“It was my son’s barrister that suggested that can be done. Otherwise I would’ve had no idea.”

Narelle said it was 18 months from when she last saw her grandchildren to when supervised visitations were granted.

“About eight months of that was being on a waiting list for supervised visitation during the court proceedings,” she said.

She said supervised contact at a supervision centre went well.

“It resulted in a much better outcome at the final court orders because I had reports done on how the children interacted with me,” she said.

These days Narelle enjoys unsupervised visits with her grandchildren.

Her advice for grandparents in similar situations? Get support.

“It’s a very difficult situation to be in and to follow through with the court. It’s definitely worth it,” she said.

“I had a lot of very good family support which was fantastic.”