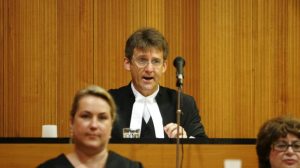 When does physical discipline of a child become unlawful abuse?

The question arose in the case of a father who had beaten his two eldest children with a cricket bat, but who argued he should still be allowed to see his six-year-old son.

The boy lives with his mother, who opposed her estranged husband having any contact with their boy.

Both she and the father had previously smacked the boy, the Family Court in Newcastle heard. But the mother claimed he was at risk of physical abuse if left with the father, because of the way the man punished his older sons from a previous relationship.

Under the NSW Crimes Act, the defence of lawful correction permits a parent, or someone acting with their authority, to punish a child with physical force. But the force must be reasonable in light of the child’s age, health and maturity, as well as their alleged misbehaviour. Force applied to any part of the child’s head or neck, or elsewhere on their body in a way likely to cause harm “for more than a short period”, is not considered reasonable.

The court heard that from around the time they were aged aged six or seven, the father hit his two eldest sons with a cricket bat and once left them with bruises and welts after beating them with a broken broom handle. In what judge Stewart Austin called a description of “cruel brutality”, a sibling recalled hearing the boys beg for mercy and scream with pain, saw the bat used with such force it broke and saw welts on the boys’ bottoms.

The boys are now in their early teens and in state care. The three other children in the household had not been abused by the father.

In determining the case, Justice Austin said it was necessary “to differentiate between physical ‘discipline’ and physical ‘abuse'”.

“Despite modern society’s changing opinion about the morality of corporal punishment of children, the law of NSW still envisages the legitimate administration of physical discipline by an adult to a child, subject to certain constraints,” he said. “It is only when the discipline transcends those constraints that it becomes abusive and ceases to be lawful correction.”

But the fact that their behaviour “presented an extraordinarily difficult parenting challenge was not an excuse for the severity of their treatment”, he said. Their punishment amounted to abuse and “criminal assaults”.

However, the judge granted the father unsupervised visits with his six-year-old son, ruling it was in the child’s best interests.

The father was not “so unfit as a parent that he is utterly incapable of safely caring for the child for short stints”, Justice Austin said. He noted that the father had undergone parenting courses and the little boy was unlikely to be as challenging as his older stepbrothers.