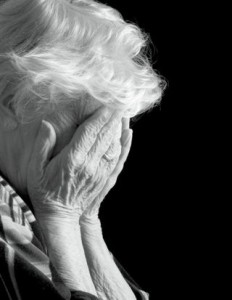 Maria* hasn’t seen her granddaughter for more than a year. She sits, nervously crumpling the papers in her hands, trying to get the words out.

Her granddaughter is the only living connection she has to her son. He passed away four years ago, just ten months after he and his wife welcomed a healthy baby daughter into the world.

When her daughter-in-law found another partner a short time later and had more children, Maria soon found that the door to visit her granddaughter had closed.

“I’ve called, visited the house and she closes the door on us,” Maria says, choking back tears.

Maria is just one of hundreds of Greek Australian grandparents caught in an ongoing battle to get visiting rights for their grandchildren.

It’s a growing problem where grandparent’s become collateral damage when couples with children get divorced.

Heightened emotions during this time cause a ripple effect that not only has the children suffering from a split home, but leaves grandparents in a tough predicament.

For seven years, the Australian Greek Welfare Society has held workshops to help grandparents understand their rights and mange the emotional situation of their children’s separation. The five-week workshop is designed to help grandparents deal with the pressure of their children’s separation and repair relationships. They invite counsellors and experts to teach affected grandparents to deal with stress, they give advice on what rights they have and what services are available to them and also give tips on how to keep civil relationships with the other family and ways to be impartial around the grandchildren.

Organisers Antonios Maglis and Kia Antoniadis have witnessed first hand how many grandparents are unaware of their rights and are ill-advised on how to be a supportive force rather than a destructive one in these turbulent times.

As a counsellor for the Greek community in these matters, Ms Antoniadis has seen the issue deepen with more and more coming to her for professional help.

“There’s a crisis in our community,” she says.

“When they feel that their parents hate one another and fight all the time it causes them mental anguish.

“But what we’ve discovered is that grandparents are also suffering.

“Their children’s problems become burdened on them.”

In the workshop, grandmother Voula* says the pressure from her son’s marriage breakdown has caused her undue harm.

“I’ve lost 15 kilos in the past couple of months, I’m losing sleep,” she says.

It’s something the organisers of the workshop see on a weekly basis and understand that the Greek tradition of protecting ones family over their own interests can be extremely damaging in these circumstances. Because of that, the group is taught ways to battle stress, ways to help deal with emotion to help them sleep better and ways to better communicate personal problems to people who can help.

Ms Antoniadis sees that stress and poor communication facilitates desperate situations when marriages break down, and without a change in attitude, the children will continue to suffer.

“It’s hard for us as people to function in a nice way when these issues exist,” she says.

“You need to walk in your grandchildren’s shoes.”

According to the Australian Bureau of Statistics, nearly one in three marriages in Australia end in divorce, and sadly 48.4 per cent of those divorces involve children aged under 18. The number of children affected by divorce has increased from 43,867 in 2011 to 48,288 in 2012.

The law is there to help the children of divorce, and if having a relationship with their grandparents is in their best interests, the law uphold that.
But the courts are to be used in extreme cases. Before the courts get involved, all cases must go through mediation, showing just how important it is to keep calm and civilised in these situations.

Picking sides and harbouring spiteful opinions isn’t the answer they say, especially for the grandchildren who expect to escape the one sided view their parents might still have.

“Don’t let your issues rain down on your grandchildren,” Mr Maglis says.

“Be the umbrella that protects your grandchildren from all those issues.”

He says it’s important to keep opinions about the other parent to oneself, and not denigrate them in front of the children. The same goes for the parents.
One grandmother at the workshop, Eleni*, says the relationship with her husband has been at breaking point because her husband refuses to be objective.
“It’s straining our marriage,” she says.

“When my husband wants to talk about all the wrong things one parent is doing and I don’t want to contribute it causes strain and anger in our relationship. He wants to take sides.”

The workshops are a way to show grandparents that they are not alone with their problems. You can see from the first meeting that those taking part have come at their breaking points, desperate for help, but still hopeful of a brighter future.

The ongoing group meetings since 2007 show how prevalent the issue is, while highlighting the complexities of each situation. No story is the same.

Grandmother Effie* has struggled to find enough time to make an impact with her grandchildren when her son only has 10 court ordered days a month to see his children with most of the visitation given to the children’s mother.

“The kids cry when they leave,” she says.

“One week because of camp they were losing to days with us, they were heartbroken.”

Sadly the emotional situation of separation means that parents don’t see the value grandparents can play in their children’s lives.

Ms Antoniadis says it’s sad to see how many parents close their minds to the idea of a healthy relationship with their children’s grandparents.

“Parent’s shouldn’t see this as something that will create problems, it’s the opposite,” she says.

“If a child doesn’t have a relationship with its grandparents, it won’t understand its roots and will miss out on cultural practices.”

The Oakleigh workshop is held on the premises of the FMC Mediation and Counselling Victoria in association with LifeWorks. Counsellors could see that when they were helping Greek.

Australian couples through their marriage troubles, they would find that grandparents were struggling just as much in the process without being given the help they needed. That’s why the AGWS workshop was born, to help deal with a growing demand in a language they could understand.

Family relationship educator at Lifeworks, Wendy Driscoll has dealt with many Greek Australian families and finds that many couples struggle to be objective when deciding what’s best of their children.

“Grandparents play an incredible role in children’s lives, because when their parents are going through a separation, even with the best will, there’s a huge amount of emotion.

“If the grandparents are non-judgmental, loving and don’t belittle either side, the can be the rock.

“They can provide a fantastic safe space for children.”

The workshop is open to all grandparents and is free. The group operates in two locations in Oakleigh and Brunswick, with the next workshop starting on July 14 at the Brunswick location.

For those needing help or would like more information on services available, call the AGWS on 03 9388 9998.