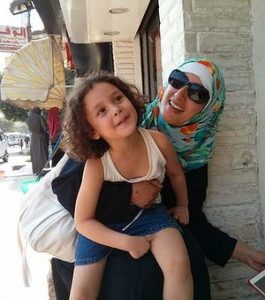 An Egyptian national has evaded Australian authorities for weeks as his Australian wife and toddler remain stranded in Egypt amid a dramatic international custody dispute.

A warrant was issued for the arrest of Mazen Hassan Baioumy, 36, earlier this month after he failed to meet a court order that he support the lifting of a ban preventing his wife and four-year-old daughter from returning to Australia.

His wife, Amaal Yasmin Finn, and their child, Zareen Baioumy, have been stuck overseas since August when they discovered Mr Baioumy obtained the travel ban through Egyptian courts.

Speaking from Egypt on Friday Ms Finn said she was safe but concerned that her husband’s whereabouts remained unknown.

“Its tiring, it’s stressful and its pretty lonely,” she said.”If they could catch him it goes a lot further again to getting me back home,” she said.

Zareen travelled to Egypt in December 2012 when Ms Finn had agreed to let the child stay with her husband’s relatives for a short time to learn the language and culture.

But Ms Finn began to suspect Mr Baioumy had no intention of allowing the child to return to Australia, prompting a fraught rescue attempt, the Family Court of Australia in Melbourne has heard.

She travelled to Egypt with her father and tried to take the toddler back.

”We ended up being taken back to the police station, we spent two nights there, we attended the public prosecutors office where we were allowed to leave with Zareen,” Ms Finn’s father told Fairfax Media.

But then they discovered the travel ban.

Australian authorities began searching for Mr Baioumy two weeks ago after he missed a court appearance in Melbourne on October 4.

In September, Family Court Justice Paul Cronin ordered Mr Baioumy, who has remained in Australia, to do ”all acts and things necessary” to have the travel ban lifted.

The orders were extended to include a requirement that Mr Baioumy sign a power of attorney authorising a person of his choice to take all steps to withdraw the case that prevents his wife leaving Egypt.

But earlier this month the court heard he had yet to sign the documents.

On Friday Justice Kirsty Macmillan granted a publication order allowing the names and images of the couple and child to be published, something the law usually prevents in family law cases.

Anybody who believes they have information about Mr Baioumy’s whereabouts is urged to contact the Australian Federal Police or Crime Stoppers on 1800 333 000.