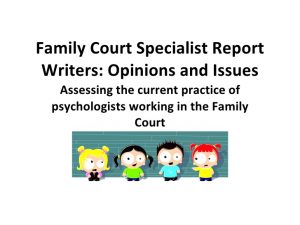 An accused paedophile has been used as an expert by the Family Court in custody disputes that involve allegations of child sexual abuse.

The psychologist, who has since been charged with sexually abusing three children, was appointed by the Family Court to make custody recommendations in cases where one parent had accused the other of sexual abuse.

One of Australia’s foremost family law experts said it could open the way for custody rulings involving the expert to be overturned.

One mother, who was sent to the psychologist in 2013 after alleging her three-year-old daughter was abused by her father, told the ABC the psychologist had made her feel extremely uncomfortable.

Greta* said he implied she may not be satisfying her husband sexually and even if he had abused their daughter it did not mean he couldn’t have a relationship with the child.

“He was kind of overly physical with me. He kept touching my arm and my leg. It made me feel creeped out. He said weird things. He kept telling me that he knew about real paedophiles and that they would show up on [psychometric] tests,” she said.

“My first impression was ‘this isn’t going to go well’.”

The psychologist’s family report was never provided to the court.

However, in another case the psychologist’s report recommended the child “continue to live with [the father]” after the mother raised allegations of sexual abuse, saying he “found no significant evidence” the abuse had occurred.

At the time of the family report interviews the psychologist had not been charged with any offences. It is alleged the offending occurred many decades ago.

University of Queensland professor Patrick Parkinson, said a child sex abuse conviction could “absolutely” give a parent grounds to seek to quash custody rulings linked to the psychologist.

“The fact that a [an expert] has been convicted would in my view amount to, in itself, sufficient changed circumstances for the court to look at the case again — in the light of the current circumstances of the child.”

Even the charges, coupled with other changes in circumstances could form grounds to challenge a custody ruling, he said.

The psychologist remains on bail and the matter has been adjourned to October.

The psychologist cannot be identified for legal reasons.

When asked what measures it had taken to ensure any expert charged with criminal offences was not used by the court, a spokeswoman said the court could not comment.

The family law system has come under heavy scrutiny after recommendations from the Australian Law Reform Commission (ALRC) in March that included sweeping changes and a call to abolish the federal system altogether.

The ALRC recommended the Family Court introduce mandatory accreditation for family report writers, otherwise known as single expert witnesses, after concerns over the quality of their reports and qualifications.

In June, the ABC revealed a Sydney psychiatrist was the subject of numerous complaints to the Health Care Complaints Commission (HCCC), that would not be investigated after the HCCC stated it did “not have the power”.

However, the ABC has seen documents that show the psychiatrist was still being considered by parents as a report writer in May.

Lilly* was one of the parents who lodged an official complaint against the psychiatrist last year and said her ex-husband had requested a family report from the psychiatrist despite the many complaints made against him.

In response, the court ordered the Sydney-based family, including three children, travel to Melbourne to attend another report writer at the parents’ expense.

Lilly said she felt bullied into signing the consent orders that required her to attend a report writer in Victoria.

“I requested more time be made available to seek out a different report writer. I indicated I could not afford the airfare or the accommodation.”

The ALRC said a national training program for report writers is being worked on in consultation with the Association of Family and Conciliation Courts (AFCC) and the federal Attorney-General’s Department.

However, an influential AFCC member involved in representations to the Government was, just months ago, cautioned by the medical watchdog for breaching a parent’s privacy including by running therapy in a wine bar.

A spokesman for the Attorney-General said the department was not involved in the development of the training but was being kept informed by the AFCC.

He referred questions back to the AFCC and the Family Court.

The AFCC did not respond to specific questions about the training, which is not mandatory for court-appointed experts.

On the AFCC website, the three introductory training modules are listed at $400 each.

The site promoted the 2020 “masterclasses” being held in Singapore, Hong Kong and Japan.

A Family Court spokeswoman said it was unable to comment on the training program.

*Names have been withheld for legal reasons.