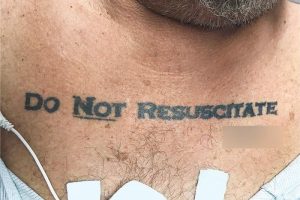 The man arrived at the hospital unconscious, without identification, with a high blood alcohol level.

He was 70, had a history of lung disease, heart problems and diabetes, and three words tattooed in big, black letters across his chest: “Do not resuscitate”.

Doctors at the Jackson Memorial Hospital in Miami, Florida weren’t sure how to proceed.

The message on his chest was clear, and has his (presumed) signature underneath, but they had no way of knowing if the tattoo was sincere, or done impulsively.

Efforts to contact the man’s next of kin were unsuccessful. Doctors administered some treatment to increase his level of consciousness, but he never become responsive enough to speak and discuss his end-of-life wishes.

“We initially decided not to honour the tattoo, invoking the principle of not choosing an irreversible path when faced with uncertainty,” they wrote in a letter published in the New England Journal of Medicine on Thursday.

“This decision left us conflicted, owing to the patient’s extraordinary effort to make his presumed advance directive known; therefore, an ethics consultation was requested.”

After reviewing the case, the ethics consultants advised the doctors to honour the man’s “do not resuscitate” tattoo.

“They suggested that it was most reasonable to infer that the tattoo expressed an authentic preference … and that the law is sometimes not nimble enough to support patient-centred care and respect for patients’ best interests,” they wrote.

The man’s health deteriorated, and he later died, without being resuscitated.

Before he died, medical staff discovered he had in fact filled out a form in advance expressing his end-of-life wishes, which were consistent with his tattoo.

What would happen in Australia?

Different state and territories have different laws when it comes to advance care planning and legal directives.

There are, however, common principles, including respecting the right of an adult who has the mental capacity to plan in advance for their health care.

“The community ethic is that the autonomous decision of the patient should be heeded by a medical team,” said Ian Olver, oncologist and bioethicist at the University of South Australia.

“But you’ve got to be able to actually ascertain what that decision is.”

To do this, under common law, doctors must be satisfied of three things: that a person was competent when they made the directive; that it was an informed choice; and that it applies to the situation they’re currently in.

“The doctor has to try and determine what the patient’s wishes are … so in this case, looking for relatives, looking for their GP, looking for documentation to try and reinforce the directive was a very sensible thing to do,” Professor Olver said.

While doctors as Jackson Memorial Hospital sought advice from a medical ethics team, Professor Olver said that was unlikely to happen in Australia.

“A lot of the hospitals have treatment ethics committees where they set ethical policy. But it is uncommon for there to be an ethicist on call for a situation like this.”

Professor Olver said it was more likely doctors would have to make a decision, especially in emergency situations.

“You’ve got to make a call, and if there’s sufficient uncertainty, I think the call might be to do what you need to do medically, and you sort it out later.

While uncommon, Professor Olver said the US case was worth examining to see what improvements could be made to advance care planning processes.

“It highlights where we perhaps need to do better, to make sure patient’s wishes are known and communicated,” he said.

Making an advanced care plan is a good place to start, and it’s important to be specific, and to disseminate it widely, he said.

“It’s worth your GP knowing if there is a copy, and certainly relatives ought to have a copy.”