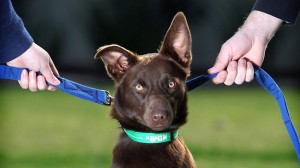 LIKE a red rag to a bull, the newly acquired puppy leaps playfully from the car and into the marital version of World War III in suburban Australia.

A jilted ex-wife has just caught her cheating ex-husband and his lover at her house downloading a computer hard drive and has called police.

She pounces on the puppy in the driveway, threatens to throw it over a fence, but in her white-hot rage chooses to punt it a metre into the clutches of her former husband.

When her rage subsides, she recalls only “calmly passing the dog to the husband to ensure it left with him”. Not surprisingly, her argument is found to be “unpersuasive”.

The puppy case is sadly one of the more tame acts of cruelty uncovered by The Courier-Mail, with a rising number of animals ducking for cover in marriage breakdowns.

The threats to kill, strangle and maim pets are becoming part of the regular revenge tactics of warring couples as they share custody of children and animals.

“Many people have pets and it is very easy to fight over animals. There is nothing worse than having a woman and kids in a refuge who go back because the animals are being mistreated.”

“When we set up, we expected to have about five dogs a year,” Mr Beatty said.

“Animals have a sixth sense and are very sensitive to the emotions of a marriage break.”

And with one in three Australian marriages ending in divorce, it is perhaps unsurprising that the number of divorce cases involving spats over animals is also rising.

Under the Family Law Act, violence against animals is a form of family violence, empowering judges to take a big stick to litigants who drag animals into a divorce fight.

It is often the case that a badly behaving pooch has driven a disgruntled spouse to the edge.

In one case, a 62-year-old husband was charged with domestic violence when he hit the pet dog with a broom to stop it urinating on the marital bed towards the end of his 15-year marriage.

“The breed is well known and it’s hardly of the kind to strike terror in the hearts of most able-bodied persons,” Judge Burnett said.

There are plenty of examples in the Family Court of dogs being mistreated, with perhaps the worst being the beating inflicting on a bull-mastiff in 2012.

The dog had ripped some latticework from the side of a house and was beaten by a father in front of a child and mother.

In one case, a 62-year-old husband was charged with domestic violence when he hit the pet dog with a broom to stop it urinating on the marital bed towards the end of his 15-year marriage.

The father threatened to “cut the dog’s neck” while punching it in front of his screaming son.

Another violent ex-husband turned on a dog belonging to his ex-wife’s new partner, attempting to strangle it in front of onlookers.

Another father beat the family dog in earshot of his children to “teach it a lesson”.

According to the Family Court of Australia, animals are regarded as “personal property” in a marital split, which means they have to be valued.

In one valuation in Queensland, receivers were dragged into a dispute to decide on the custodial arrangements of a horse when the couple failed to reach an agreement.

In another recent property fight, an ex-wife walked away with nine pedigree dogs worth $30,000 in her split with her ex-husband after a 24 year marriage.

Animals are also often used in the toxic post-separation games played out by warring spouses.

In one hostile prank, an ex-husband broke into his ex-wife’s home and replaced her couch with the dog bed and placed the television remote control beside it.

Another ex-husband had cried poor to the Family Court with claims he was “trimming the meat of the dog bones” to feed himself. The property pool had included a Volvo and a Range Rover.

According to the Family Court of Australia, animals are regarded as “personal property” in a marital split, which means they have to be valued.

“People don’t want to go all the way to court and spent $50,000 to argue over animals, so it is usually decided that one person is closer to the pets,” Mr Page said.

But in some cases, it can all go horribly wrong.

For instance, a Queensland divorcee once organised to get the family dog “put down” before the property settlement, leaving lawyers to break the news to her ex-husband.

Another divorcee was brought to tears after learning of the death of the 16-year-old family dog weeks afterwards when their only child dropped it into conversation.