The bitter legal dispute between the parents of two boys, killed by an out-of-control car, has hit court, with both arguing how they should be laid to rest.

The parents of two young boys, allegedly mowed down and killed by an out-of-control driver in January, are engaged in a bitter legal dispute over how their bodies should be laid to rest. 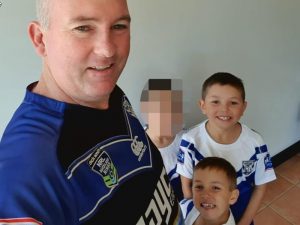 Shane Shorey, 7 and Sheldon Shorey, 6, died after they were hit by a car on January 6 while walking on the way back from the swimming pool in Wellington, in central NSW.

They were walking with their mum Shayleen Frail and two others who were all hospitalised with severe injuries.

Last week, it emerged that Shane and Sheldon were still being kept in a morgue in Newcastle after their parents had failed to agree on their final resting place.

The boys’ father Joseph Shorey, who lives in Queensland, wants the boys to be cremated and their ashes to be split with their mother, while Ms Frail wants their bodies buried together in Wellington.

The dispute hit NSW’s Supreme Court today, where Justice John Sackar heard submissions from each parent and promised to deliver a speedy decision next week.

“I understand entirely the grief experienced and it is incumbent on me to move this matter on,” Justice Sackar said.

, representing Ms Frail, described the “significant cultural elements” involved in burying the boys in Wellington and said the family felt cremation would cause the boys further pain in the afterlife.

In an affidavit submitted by Ms Frail, she said she was concerned about the boys being cremated, describing the act as something that would inflict “more suffering on the boys after death”.

“Being cremated after death is putting my babies through more pain and suffering,” Ms Frail said.

“Cremation will separate the boys and (Ms Frail) does not believe her boys will rest easy after death as they will not have a final resting place,” Mr Jones added, on behalf of Ms Frail.

Ms Frail hopes to bury her boys in a single coffin, laying side-by-side.

If that’s not possible, she will place them on top of each other so they can “remain together and continue together onto the afterlife, protected by family and friends in region”, Mr Jones said.

Ms Frail said she was “very scared” that if her boys were cremated, another family tragedy could occur – such as a house fire or a break and enter – and she would have nothing left of them.

Mr Jones told the court the belief in Wellington’s Aboriginal community was that burial helped the bodies “return to Mother Earth … and allowed the elders to guide the boys to the afterlife”.

The boys being buried also allowed the community to maintain a relationship with them.

“It’s not simply a place to mourn and grieve, but a place to feel close to and connect to.

“That belief system is not something (Mr Shorey) says he ascribes to.”

Mr Jones said Mr Shorey’s hope to have his boys’ ashes with him was not a “religious consideration” but a “way to manage his grief”.

“Grief feelings will dissipate and lessen as people move on with their lives,” he added.

Mr Shorey’s barrister, Mark Anderson, argued the father had always maintained a strong relationship with Aboriginal communities and he had been caring for the boys since January 2020.

Mr Shorey also spoke about his fear of returning to the Wellington community after crosses he arranged to be erected in memory of the boys were set on fire and destroyed.

The court heard Mr Shorey was worried, if the boys are buried in Wellington, he may be unwelcome in the NSW town and would be unable to mourn their loss.

Mr Shorey also lives in Emerald, which is around a 16 hours drive away from Wellington.

A number of affidavits from Aboriginal elders attested to cremation sometimes being used in death. Mr Anderson also explained that before colonisation, cremation was the norm in Indigenous cultures.

He added that Mr Shorey grew up in Aboriginal communities, had strong ties to the community, was regarded as one of their own and was “sensitive to Aboriginal burial and supportive of that”.

Mr Shorey wants to have a funeral service in Wellington but hopes his boys can be cremated after that, with the ashes split between both parents.

Mr Anderson, through the affidavit of an Aboriginal funeral director, argued burying the ashes of someone was the same as burying their body, however, Mr Jones, the barrister representing Ms Frail, said this was only the case when the ashes were of someone’s entire body.

“The arrangements from (Mr Shorey) will provide a more practical way in which both parents can grieve the loss of their children in a culturally accepted way,” Mr Anderson said.

Justice Sackar reserved his decision for next week.

Jacob Donn, 25, the man charged with the boys’ deaths, will reappear in court next month.

A GoFundMe page was set up to help pay for the boys’ funerals, which raised more than $28,600.

Mr Shorey earlier told The Dubbo News that a portion of that money had now been used to cover the legal costs of the Supreme Court case.