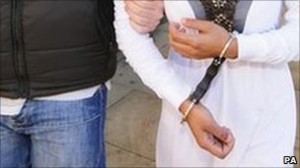 A MARRIAGE celebrant and a migration lawyer ran a visa wedding scam that bankrolled a multimillion-dollar property portfolio, the Australian Federal Police claim.

Divya Krishne Gowda is accused of conducting sham marriages for 80 Indian students paying $10,000 each in a racket that ran for two years before The Courier-Mail exposed it, court documents lodged in an AFP proceeds of crime application state.

The documents state her husband, Bombay-born Chetan Mashru, allegedly brokered the marriages, paying “recruiters” $1000 to source Australian brides who earned up to $15,000 to marry a stranger.

The couple have not been charged but, according to the court documents, an ongoing Immigration Department investigation has obtained at least 25 witness statements.

More than $2.2 million in property owned by Ms Gowda, along with $13,050 cash seized in a raid last November, has been temporarily frozen.

The couple, both 33, have not yet responded to the application. A further hearing is due to take place on May 22.

Court documents reveal the AFP suspects Ms Gowda “managed the financial side”, taking payments for the marriages through an account that cleared more than $1.1 million in deposits.

They allege Mr Mashru typically split up to half of his $10,000 fee with the bride, who would then be promised $1000 a month from the groom for two years.

Mr Mashru would then charge for preparing fraudulent visa applications, keeping his own name off the paperwork.

“The couples are told to have photographs taken together, open joint bank accounts and keep personal items and clothing at each other’s residence to make the marriage seem legitimate,” the AFP alleges.

One young woman described earning $15,000 for a “contract marriage” after a friend handed her Mr Mashru’s business card in February 2011.

Within days she was in his office marrying a taxi driver who used Mr Mashru’s iPad to put $2000 in her account.

The next day, she drove a friend to his office to be married and later earned $1000 for headhunting another friend who was “in financial trouble”.

Mortgage accounts – lodged with the application – show Ms Gowda built up $477,953 in equity in nine Brisbane properties during the alleged scam.

If convicted, they each face up to 10 years in jail and fines of $100,000 for breaking migration laws.