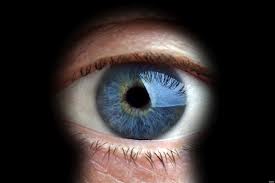 A Tasmanian man infatuated with his wife has admitted spying on her through a peephole he made in a bathroom mirror.

In the Hobart Magistrates Court yesterday, the 57-year-old man pleaded guilty to one count of observation or recording in breach of privacy.

The court heard the offence occurred after his relationship with the 34-year-old with whom he had two children went into a decline.

Police prosecutor Steven Harper said that in August last year the woman was undressing for a shower when she spotted him looking at her from on top of a water tank.

When they discussed the matter, he agreed to respect her privacy in future and wrote her a letter expressing his love and admiration for her.

In October, she noticed a scratch in the bathroom mirror and examined the adjacent room, where she found a peephole hidden behind a painting.

She called police, who seized the man’s computers and some related items.

When interviewed, he admitted watching his wife while she was in the bathroom for his own gratification and had recorded video footage of her but had discarded it.

Defence lawyer Roger Baker said the case was an unusual one and sprang out of the man’s obsession with his wife and his frustration at a decline in intimacy between them after she began a university course.

Mr Baker said his client had a history of exhibitionism and had been seeing a psychologist before and since the time of the offences. The couple’s marriage had failed spectacularly after the offence, he said.

Chief Magistrate Michael Hill said the case was unusual and legislation preventing such offences apparently was not intended to be applied in domestic situations.

He released the man without conviction on the condition he not commit a similar offence for two years and on condition he continue with his counselling.

Under the Police Offences Act, it is illegal to observe or visually record another person in circumstances where a reasonable person would expect to be afforded privacy.

The offence carries a maximum penalty of 12 months jail or a fine of $6500.