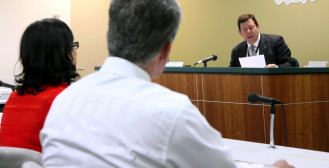 Sydney solicitor Victor Berger made regular phone calls to a frail and elderly client, checking on her health, her relationship with her children, and her housework.

After her unit was sold, Mr Berger directed the buyer to pay $154,000 into his bank account, despite it being trust money belonging to Mrs N’s estate. He later had $20,000 transferred from the trust money to his son-in-law.

An assessor found Mr Berger overcharged the woman by $137,543.

Five years earlier, Mr Berger went to an intensive care ward and oversaw an 84-year-old dementia patient sign over power of attorney to her daughter, without speaking to medical staff about her ability to understand the decision.
The daughter then took $1 million to put into her own superannuation, and sold millions of dollars’ worth of her mother’s shares.

The Guardianship Tribunal of NSW found the mother did not have the capacity to sign over power of attorney to the daughter, and Mr Berger was cautioned by the Office of the Legal Services Commissioner of NSW.

Those cases were among more than 70 complaints against Mr Berger between 1996 and 2013.

Last week the Civil and Administrative Tribunal of NSW ordered Mr Berger be removed from the roll of local lawyers, after finding him guilty of a wide range of conduct, including overcharging in the case of Mrs N, misappropriation of funds from various estates, and failing to disclose costs.

The tribunal found Mr Berger posed as a charitable, upstanding member of the community, while ripping off his clients.

“The clients who were found to be victims of the practitioner’s misconduct and unsatisfactory professional conduct were not Rabbis; they were not members of parliament, judges, senior counsel or prominent members of the community,” the tribunal’s judgment said.

“Some of them were old; some were frail; some had cognitive decline; and some lacked the support of family and friends.

“The tribunal has concluded that the professional misconduct and the unsatisfactory professional conduct were aspects of the practitioner’s behaviour that he concealed from most of the people he mixed with in the community and in his charitable, professional and religious activities.”