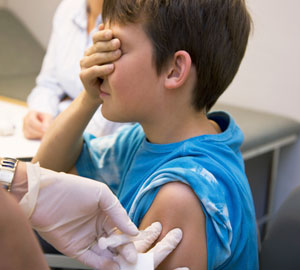 A Sydney father has won the right to vaccinate his children after a drawn-out legal battle with their mother, who is strongly opposed to immunisation.

The children, a son born in 2002, and a daughter born in 2004, now live with the father and have both had whooping cough.

The Family Court rejected the mother’s claims that the children, who will turn 14 and 12 this year, were at an increased risk of experiencing ”vaccine damage” due in part to various allergies she believes they suffer from.

Sitting at Parramatta, Justice Garry Foster said the 42-year-old woman, given the pseudonym Ms Duke-Randall, had submitted hundreds of documents about the risks of vaccination, such as the link to autism.

Justice Garry Foster said much of it ”is comments, submissions, irrelevancies” and Ms Duke-Randall had become ”narrowly focused on it, perhaps to the point where the best interests of her children have been subsumed”.

The father, Mr Randall, 52, said during their marriage he agreed with Ms Duke-Randall’s anti-vaccination view ”for the sake of peace in the household” but since their divorce in August 2011, he had come to realise his son and daughter were missing out on extra-curricular activities because they were not immunised.

Some of his relatives were unwilling to have their children socialise with his children and he was worried they would be excluded from school during an outbreak of an infectious disease.

But he said he ”was simply unable to negotiate with [the mother] on the issue”.

While the parents fought over other issues including custody and property, the court restrained both parents from vaccinating the boy and his younger sister until a three-day hearing into the immunisation issue could be held in January this year.

But last month Justice Garry Foster discharged the order, finding the mother had been deliberately delaying proceedings and ignoring directions, which led to the ”strong inference that she has done so to suit her own end that the issue as to vaccination be delayed for as long as possible”.

The mother claimed any delay in presenting her case was caused by the court not permitting her to use medical evidence regarding her children’s susceptibility to being adversely affected by vaccines.

Justice Garry Foster accepted evidence from a senior consultant in immunology, given the pseudonym Professor K, that both children are healthy and do not have any allergies or any other contraindications to vaccination.

Both children had been kept on a low-salicylate and low-amine diet but once the father gained primary custody, they had begun to eat a normal diet, Professor K said.

She recommended the children be bought up to date with the routine childhood immunisations.

The case is the latest in several court judgments that have found on the side of the parent wanting vaccination.

A report by the National Health Performance Authority last week found childhood ­immunisation rates have ­improved over the past year.