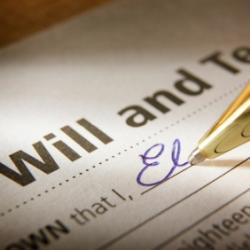 Estate disputes are an unfortunate yet common place legal issue in contemporary society. However, estate disputes are not solely the result of familial animosity, relationship power imbalances and difficult family dynamics as many assume them to be.

Estate disputes often arise as a result of miscommunication and in cases where Wills and Trusts have been constructed or amended both as the result of, and in the circumstance of, impaired physical or mental states.

Nonetheless, estate disputes are highly circumstantial and can involve a number of parties, many of which may be unaware of their rights and entitlements. One such party includes children, whether adult or infant children, who have been excluded from their parents’ Will, and thus have an inclination to contest it.

“Never say you know a man until you have divided an inheritance with him.” ~ Johann Kaspar Lavater

There is a strong case for such children, children generally being entitled to their parents’ estate, or part thereof, despite their exclusion from their parents’ Will. Previously dealt with under the now repealed Family Provision Act 1982 (NSW), the main basis for this entitlement lies within the Succession Act 2006 (NSW) in the form of a family provision claim.

Defined under Section 3 of the Succession Act 2006 (NSW), a family provision order is an order made by the Court relating to the estate of a deceased person to provide from that estate for an eligible person. There are of course rules defining the eligibility of a claimant and the use of estate provisions but such rules are conducive for a child who has been excluded from their parents Will.

Section 57 of the Succession Act 2006 (NSW) sets out the criteria of eligibility to make a family provision claim, or in other words, contest a Will. Among those eligible is a child of the deceased person whose Will is in contestation 1, including a child born into 2 or adopted 3 by a de facto or domestic relationship, or a child whose long term welfare the deceased had parental responsibility for 4. Moreover, it is assumed that there is a moral obligation on the deceased to provide for the maintenance, education and advancement in life of their child.

“I want to leave my children enough that they feel they can do anything, but not so much that they do nothing.”

This moral obligation of a parent to provide for their children, even after death, arises from long held community values and expectations, a number of which have been alluded to in case law. Namely, the expectation that parents are to raise and educate their children to the best of their ability and provide them with a stable and positive start in life; to provide a buffer against contingencies their child may face; and in the case where an adult child remains dependent on the community, to make provision to fulfil that ongoing dependency after death. 5

The basis upon which children are generally entitled to a claim from their parents’ estate despite being excluded from their Will has been emphasized in a number of cases. In the 2011 New South Wales Supreme Court Case of Andrews v Andrews 6, a case in which an estranged daughter claimed a greater provision from her mother’s estate than the legacy left to her in her mother’s Will, Associate Justice Philip Hallen reiterated a number of common law principles relating to family provision claims.

A similar case to Andrews v Andrews, the 2011 New South Wales Supreme Court case of Bourke v Keep 10 involved an estranged daughter enacting her right as a child of the deceased to inspect her mother’s Will despite her exclusion from it. The case also brought to light the legislative basis upon which family provision claims are both made and assessed.

There is a question then, as to the rights and entitlements of an estranged child to their parents’ estate upon their exclusion from the Will. The answer to this recurrent question can be found in case law, and specifically, in the appeals of the two aforementioned cases. When taken to the New South Wales Court of Appeal in 2012, Andrew v Andrew 16 held that estrangement between a parent and child should not be given disproportionate significance when considering the expectation that a parent will provide for a child whose condition in life is unfavourable.