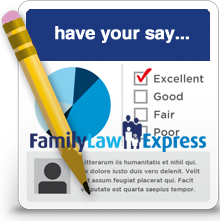 The Family Law Express study was primarily comprised of a detailed questionnaire, designed with a distinct emphasis on robust and meaningful representation.

Of enormous significance and as a point of distinction with the AIFS research, Family Law Express focussed on the experiences of the affected parents, as opposed to the views of lawyers, judges and other family law professionals, who it could be argued would have been denied exposure to the ultimate consequences of the ICL practices in question, amongst other obvious deficiencies.

The study findings have exposed many flaws with regard to current enforcement of ICL standards and guidelines, as well as funding, education, and ICL practice more generally. The respondent parents expressed dissatisfaction and a lack of confidence in ICLs repeatedly through-out the study, raising obvious questions as to the extent of the discord between the perceptions of professionals and the core subjects themselves.

Given the principle responsibility of an ICL is to improve the outcomes for children in family law disputes , Family Law Express have attempted to address the incongruence in the AIFS study where only 6% of research participants were parents, carers or children involved with an ICL.

Given that 94% of the research participants in the AIFS study were professionals within the Australian legal system, Family Law Express have added a different and essential perspective to the ICL debate, that of parents who, alongside their children, are most closely affected by the involvement of ICLs in family law disputes.

Amongst the more surprising of the Family Law Express’ findings, only 8% of research respondents believed that the ICL best represented the interests of their child or children. In a further finding, 64% of respondents ranked the ICLs instrumentality at just one on a scale of one to ten where one represented no importance at all. Not only do these findings reveal problems with current ICL practice but they undermine the principles upon which ICL practice is premised.

This study suggests that reform in the practices and accountability of ICLs is not merely required, but is in fact necessary and urgent. It is necessary not only to ensure that the law remains applicable and relevant to current and changing contexts, but in terms of ICL practice, law reform is necessary to the wellbeing and future of countless Australian children.

And in an era of heightened awareness of child safety in the context of family disputes, reform of the practice of ICLs is a constructive and worthwhile measure that can be quickly undertaken, but only if the political will is there.