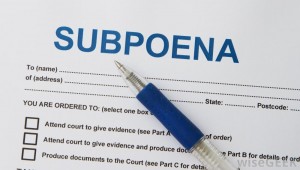 In family law disputes, it might be necessary to subpoena medical records of either the opposing party or a third party.

Seeking to issue a subpoena can be a complicated process, and is regulated by court rules of the relevant courts.

This ‘how to’ guide seeks to provide a step-by step guide to assist a self-represented litigant who want a court to issue a subpoena for medical records.

What is a subpoena?

A subpoena is a legal document issued by the court at the request of a party. A subpoena compels a person to produce documents or give evidence at a hearing or trial. There are 3 kinds of subpoena:

This guide will deal mostly with the subpoena for production (1), though, it might be necessary to subpoena a medical expert to give evidence at a hearing.

Medical record means the histories, reports, diagnoses, prognoses, interpretations and other data or records, written or electronic, relating to the person’s medical condition, that are maintained by a physician, hospital or other provider of services or facilities for medical treatment1

It is important to note that the Family Court of Australia will not issue a subpoena for a self-represented litigant unless a registrar has given prior approval.2 In such a case, it is necessary to prepare a letter to support the subpoena.

Step 1: Fill out the form You will need to complete the form titled Subpoena which is obtainable from Court registries or downloadable from the court websites:

Note: Make sure that the form that you are filling out has been approved by the court in which you are litigating. 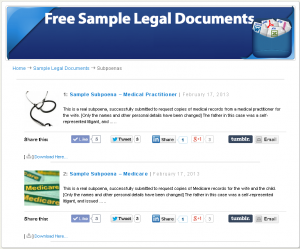 When completing the subpoena form, keep in mind:

■   –       A subpoena must identify the person to whom it is directed by name or by description or office or position. If you wish to subpoena an organisation, the subpoena should be directed to a person authorised to act on behalf of the organisation.

■   –       A subpoena for production must identify the specific documents to be produced. For example: “Any records, notes or reports or any other written material held by any facility of X Area Health Service, including but not limited to Hospital X relating to person X and relating to an alleged sexual assault on 1/01/2014.”

Step 2: File the Subpoena Once you have completed the subpoena, file it at the Court. You will need to file the original and at least two copies. You will need to ensure that you have enough copies for service on each other party including the independent children’s lawyer if one has been appointed. The Court will keep the original subpoena and give you back the copies sealed with the Court’s stamp.

3.1 Mode of service There are differing requirements for service in different jurisdictions.

3.3 Brochure When serving the subpoena on the person subpoenaed, and other parties or interested person, you should also provide them with a copy of a brochure which gives the named person information about their rights and obligations. These brochures can be obtained from the relevant Court registries or downloadable from court websites.

Special Rules for subpoenas for production of documents

In some cases, all parties may be automatically permitted inspect documents produced under a subpoena without the need to attend a court date. 6 This can only occur if:

Note– in the Federal Circuit Court an inspecting party will not be able to photocopy medical records. 7

A person may object to the production of the documents required by the subpoena for various reasons including:

Such a person may seek an order for a subpoena to be set aside.

In the Federal Circuit Court, the person whose records have been produced may give notice to the Court that they want to inspect those medical records in order to decide if they wish to object to their inspection. 8

If they object to their records being inspected, they are allowed to file their notice of objection within 7 days after the date for production in the subpoena. In this case, you, or any other party or interested person, will not be permitted to inspect the medical records until the later of 7 days after the date for production, or the hearing and determination of any objection.