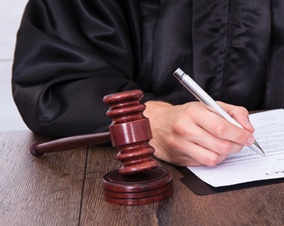 Close-up Of A Judge Hitting Mallet At Desk

De facto couples – even those who have a child and live together – have significant social, financial and emotional “differences” to married couples, according to a Federal Circuit Court judge.

Judge Joe Harman has ruled a man and woman who had a child, bought a home together, and lived in it for 13 years were not in a de facto relationship and had had sex out of “need”, not love.

This meant the court had no jurisdiction to divide up their property under family law.

The woman, “Ms Benedict’’, argued the couple were in a relationship and lived together from 1992 to 2010.

Ms Benedict told the court they’d been sharing a bed and were in a marriage-like relationship, even though she had been claiming Centrelink benefits and filing her tax returns as a single parent.

However, her alleged partner, “Mr Peake”, said they’d never been in a de facto relationship and simply lived together with their daughter for convenience, in separate bedrooms.

Assessing whether they were in a relationship, Judge Joe Harman said Mr Peake mostly “attended to his own needs”.

“This included attending to his washing at laundromats or at other premises, making his own meals (or more often than not taking meals outside of the home or buying takeaway) and by and large living and maintaining his own life and lifestyle,” Judge Harman said.

He said the pair had not maintained a relationship that could be described “in normative terms” as marriage like.

“Indeed, a de facto relationship may be described as ‘marriage like’ but it is not a marriage and has significant differences socially, financially and emotionally,” he said.

But Forte Family Lawyers partner Jacky Campbell said many married couples stayed together for years for the same reasons Mr Peake and Ms Benedict lived under one roof: for financial reasons and the benefit of children.

“The Family Law Act has been changing over many years to give de facto couples the same rights and responsibilities with respect to parenting and financial matters as married couples,” she said.

“Judge Joe Harman seems to be saying that de facto relationships are different. I don’t know what these differences are. His comments appear to be contrary to the law and the general views of society.”

The judge accepted Mr Peake’s evidence the pair had not held themselves out to others as being a couple and said their sexual relationship was “brief, sporadic and far from reflective of mutual commitment”.

“In all probability for these parties and especially Mr Peake, engaging in sex with each other has met a need and has not imported or implied anything else be it emotion or commitment,” he said.

The pair lived different hours: Mr Peake usually worked through the night and went to bed in the morning, and Ms Benedict woke usually in the morning and slept at night.

They were largely financially independent, but Mr Peake had taken care of the mortgage.

Ms Benedict paid some of the bills, helped to maintain and improve the home and had cared for their daughter.

They had also been involved in a business together and took overseas trips with their daughter.

However, Ms Benedict had failed to register Mr Peake’s name on her daughter’s birth certificate.

Ms Benedict argued this was an oversight that occurred while she was heavily sedated following her daughter’s caesarean delivery. However, the judge found this was “substantially and significantly inconsistent with Ms Benedict’s evidence and assertions as to the level of closeness, joint purpose and intent and mutual commitment to relationship”.