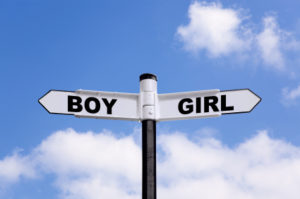 WE are a fairly ordinary, suburban Australian family. We earn an average income. We follow the football, watch the news, help at school, enjoy our friends and family, go to the movies and love music.

When I was pregnant with our twins, I had scans regularly throughout the nine months. There were many opportunities to ask the sex of these two little floating universes.

I never asked. I didn’t mind what combination of sex I had. I didn’t care about nursery décor or what cute little outfit I would buy. We were blessed with two healthy boys, and we couldn’t have been happier or prouder.

One night, when my boys were about three years old, I was drying them both off after bath time. Bill was chatting away and very brightly said “mummy, I don’t want a penis, I want a vagina.”

We had taught the boys the proper names for parts of the human body, but I just blinked at him thinking I had misheard. He looked back at me. “But Bill, you have a penis. You’re a boy,” I said.

He finished drying off and life went on. But that was the first moment I made a connection that something might be different about our Bill. It feels so awkward to refer to Kate as Bill, and as “he” now. But for the purposes of this story, I will.

Bill had been into “girly things” from the beginning. We never bought him or his twin Jim, “girl stuff”, but Bill would turn a truck into a girl truck or a Buzz Lightyear costume into a Mira Nova costume or a towel into long hair.

He never stopped wanting to express himself as female. He went to kinder and dressed as a girl in the dress-up corner every day. He began school, had friends, wore the boy’s uniform but always played the girl in their games.

But school was really the beginning of the end for Bill. It was there he realised he was stuck as a boy. Bill began to show signs of real distress around the age of 6-7. He would say “mum, it’s so hard trying to be a boy” and “I have to go to school disguised as a boy”.

He wouldn’t use the boy’s toilet and would hold on all day. He would come home upset, angry and say, “You don’t understand. I wish I was dead.” These words hit hard when you hear them. That my beloved child should be suffering this much was shattering.

We had tried to reinforce his masculinity. But the truth is, when you have to try to convince your son he is a boy, you have a problem. We thought/hoped it was a phase that would pass in time, or that he might be gay, which was just not an issue for us.

We decided we needed to seek professional help and we found it at The Royal Children’s Hospital, Melbourne where they have a Gender Dysphoria Service. (This service is the only fully dedicated gender service for children in this country and is terribly underfunded.)

The relief for Bill was instantaneous. To be able to express his feelings openly without judgement was such a big help. As parents we were relieved as well that we were not blamed for our child experiencing this.

While this was the diagnosis we feared the most, it was a relief to know what we were dealing with and that Bill would have the very best care available. We were referred onto an endocrinologist at the hospital.

After a couple of years of counselling and ongoing exploration of all of Bill’s options, we decided as a family that for Bill’s health and well-being it was essential we support her to affirm her identity and live as female in every aspect of her life.

To say she flourished is a totally inadequate. She was at peace and could focus on living her life with enthusiasm and ambition. She had been telling us for years that she was a girl.

It wasn’t the fancy of a confused or over-indulged child. It wasn’t that I had secretly wanted a daughter and was forcing my son into the role. It wasn’t that we were too liberal as parents and had filled the kids with weird new age notions of gender fluidity.

Yes, these were claims made against her and us at the time. We thought we had a son and now after much heartache, resistance and hard work to understand, we accepted we had a beautiful, happy, fully expressed, intelligent, wise and amazing daughter. Kate.

When Kate reached puberty, our specialists agreed with her and us that she was suitable for puberty suppressing treatment. Having never shown any signs of male identification, nor any sign or desire from Kate that she would “change her mind”, we embarked on the next big challenge.

Australia is the only country in the world where parents of children receiving treatment for GID are required by law to make an application to the Family Court of Australia on behalf of their child to gain court authority to proceed with ongoing treatment.

Our child was granted the use of puberty suppressing hormones and has avoided the development of any secondary male characteristics that would have caused her terrible distress and made her life unbearable.

The court process remains a huge obstacle to children accessing the treatment they need and supported by their parents by treating specialists. It remains that parents again have to go to court to access the second stage of the one treatment, around the age of 16.

Again, this prevents those that simply cannot afford court costs (up to $30,000) from accessing, treatment that to them is literally life-saving. Without it, many children become suicidal, self-harming, withdrawn. Hopeless.

These are the areas that I, as a parent, feel needs to be addressed as priorities for the families of children experiencing gender diversity. And they’re not the only things that need to be addressed.

Fund the Gender Dysphoria Service at Royal Children’s Hospital, Melbourne. The waiting lists are long and once a family seeks help they are usually already at crisis point and need help urgently. This is the highest priority of all.

Fund the service that is the source of real support, expertise and treatment for children with Gender Dysphoria. GPs also need to be better informed of issues surrounding gender diversity and who to refer the family/child onto.

Families require ongoing support as the journey is exhausting, challenging, conflicted, and requires constant vigilance in order to safeguard the rights and safety of the child as well as caring for the rest of the family, educating schools, family members, friends, sporting groups…the list is endless.

Grief, anger, confusion and guilt are a parent’s constant companions. Judgement/bullying by others (both inside and outside of the family) is common and causes further feelings of isolation and rejection.

Make sure schools know there is a policy for transgender and intersex children, which has to be adhered to.

Too often we hear horror stories of gender diverse children being humiliated and unsupported by school staff. Leadership is needed from the department and the principals. Some schools have shown excellent leadership and created an environment of support for everyone.

Connect parents to support networks such as Transcend: Supporting Transgender Children and their Families.

Transcend on-line can be found here.