Using a carriage service to harass or offend

In one of the first legal cases in Australia involving the social phenomenon of ‘sexting’, a Sydney pool cleaner appeared in court facing multiple harassment charges after sending explicit text messages, photographs and videos to eight Sydney women.

Having initially been sentenced to at least 3 years imprisonment by a magistrate, the District Court has shaved 16 months off this sentence.

Peter Lewis Sheather, 41, appeared in Downing Centre Local Court after being charged with nine counts of using a carriage service to menace, harass or offend.

The offence can lead to a maximum penalty of 3 years imprisonment.

At trial, it was revealed that the victims were customers of two pool maintenance firms, where Mr Sheather worked as a pool cleaner.

Mr Sheather exploited his occupation to source intimate details about each woman and their backyard pools, including their mobile numbers.

Mr Sheather then used an IPhone, which he had obtained under a false name, to send sexually explicit messages to his victims.

His messages ranged from telling each victim that he wished to have intercourse with them and acknowledging them by their first name, to sending graphic videos involving sexual acts.

Mr Sheather was unknown to each woman when the messages were sent.

When a victim warned Mr Sheather that she would report him to the police, he replied, “You don’t even know who it is”.

The majority of the offences originated from Bellevue Hill and Paddington between March and April 2014.

NSW Police raided Mr Sheather’s Cammeray residence on April 24 and seized mobile phones, laptops and documents as evidence. He was arrested that day and granted bail.

“If you had to look up the word depraved, you would find an entry: Peter Sheather”, the magistrate stated.

Furthermore, Mr Prowse noted that Sheather had a “hideous” record of offending and had little prospect of rehabilitation.

Mr Sheather had previously been jailed for 18 months after pleading guilty to almost 100 counts of menacing women, only approximately seven months after he had served a jail term for similar offences in 2001.

As a result, Mr Prowse criticised Mr Sheather heavily, describing him as a person who deserved nothing less than a jail sentence for harassing his victims.

“It’s a bad judgment call that the appellant has made on repeated occasions,” he added. 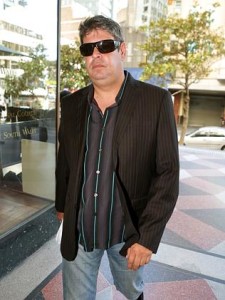 Mr Sheather was also denied a defence application by Mr Prowse during proceedings.

This was to be used to have the sentencing adjourned pending a psychological evaluation.

The court heard that Mr Sheather had sought treatment for depression and had a disadvantaged childhood marred by sexual abuse.

However, Mr Prowse responded by stating “depression does not equal depravity”.

“Just imagine the outrage of the victims if he wasn’t jailed.”

However, Mr Sheather had his sentence reduced by 16 months on appeal to the District Court.

Judge Michael King noted that the magistrate who originally sentenced Mr Sheather mistakenly handed down a total jail term which was more than what was available to the Local Court.

“It’s not uncommon for magistrates dealing with lengthy lists of matters before them to make such errors,” he told the District Court on Friday.

However, Judge King did not accept the defence’s argument that “snide remarks” for passers-by aimed at Mr Sheather served as a form of punishment.

“The community is entitled to know … the appalling behaviour of Mr Sheather and entitled, if they should remember it, to be able to recognise him,” Judge King stated.

As a consequence, Mr Sheather is eligible for release in March 2016.