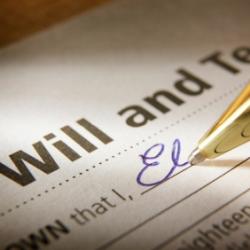 There is a tension between the right of a Will-maker to choose who will benefit from his or her estate and the frequent expectation by adult children that they will be the primary beneficiaries of their parent’s estate.  The law recognises this tension and attempts to balance competing interests by allowing a Will-maker to leave their estate as they choose and also allowing disappointed children to make a legal claim for some or further provision from a deceased parent’s estate.

The question of appropriate provision is further complicated when the relationship between the adult child and the parent was marred by estrangement.  Estrangement is a rift in relations and may be used by a parent as a reason to reduce a child’s benefit under a Will or to deny them any benefit at all.  The Court must weigh this factor against the child’s need for provision from the estate by determining what moral duty (according to prevailing community standards) the parent had to provide for the child.

The Succession Act (2006) (NSW) allows a child to make a claim for some, or further, provision from a deceased parent’s estate.  The Court may make an Order for a child’s proper maintenance, education or advancement if satisfied that there is justification for doing so.

The Succession Act contains a list of matters that the Court may take into account when considering whether or not to make provision from an estate for a claimant.  These include the:

The Court will look at the reasons behind the estrangement and may find fault with either or both the parent and the child, and if appropriate, adjust entitlements in the estate accordingly.

Two matters determined in the NSW Court of Appeal in 2012 provided further commentary on estrangement between an adult child and their parent.

Joyce Keep left her entire estate to two of her children, to the detriment of her other child, Marion Bourke, from whom she was estranged for 38 years.  Mrs Keep’s Will included the following statement:

“I HAVE made no provision in this my Will for my daughter MARION GAY BOURKES [sic] because of her complete lack of concern or contact with me and other members of my family over a long period of time”.

The breakdown in relations commenced in 1971 when Marion’s parents did not approve of her marrying and returned their wedding invitation with a note saying “we do not want anything to do with you”.  Marion saw her mother five times in the ensuing 38 years, the final time being Marion’s only deliberate effort to see Mrs Keep, having been notified of her impending death.  Mrs Keep had made no attempt to see Marion at all.  Mrs Keep was held to be the instigator of the separation, though Marion did not attempt reconciliation.

The Supreme Court made a determination that Marion had a need and was entitled to provision of $200,000 from an estate worth $623,000, despite the competing claims of her siblings, who were also in need of provision.  The Court of Appeal adjusted Marion’s provision to $175,000, there being “a reduction recognising Marion’s contribution to the estrangement”.

Like Keep v Bourke, this case involved a long estrangement between a daughter, Lynne Andrew and her mother, Rita Andrew.

There was no hostility between Lynne and her mother, rather, the relationship simply faded after Lynne graduated and left home in the early 1970s.  Lynne later suspected that Mrs Andrew would disown her for having a child out of wedlock and also on account of her homosexuality.  No evidence was tendered that Mrs Andrew disapproved of the illegitimate child or that she was aware of Lynne’s homosexuality.

“As explained by the primary judge, the term “estrangement”, which was aptly applied, does not describe conduct, but the condition which results from the attitudes or conduct of one or both parties…  At least when kept within reasonable bounds, the negative consequences of such a process should arguably be ignored or at least not given disproportionate significance when assessing the expectation that a parent will provide for a child whose condition in life is financially disadvantageous, when compared with other claimants on the testator’s conscience.”

These two cases are similar in that they involved estrangements of over 35 years between a daughter and her mother.  Both daughters demonstrated that they had need for provision from their mothers’ estates but the outcomes were substantially different, in part according to who was considered to have initiated and maintained the estrangement.

Every family provision claim is different and will be judged upon the facts (importantly, including the needs of the claimant and the other beneficiaries).  Whilst estrangement can certainly be a factor in reducing a child’s claim on their parent’s estate, the Court will not necessarily regard it as justification for virtually or totally excluding an adult child as a beneficiary.