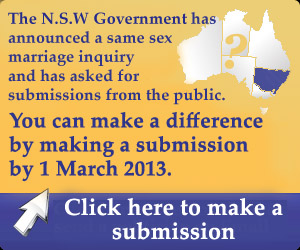 A NSW Liberal politician who supports gay marriage has said he is ”grateful” to Premier Barry O’Farrell for setting up an inquiry that yesterday cleared the way for NSW to introduce a bill to legalise same-sex marriage. ”This is what democracy is about,” said the Liberal member for Coogee, Bruce Notley-Smith.

NSW could become the first Australian state to legalise same-sex marriage after the inquiry found NSW has the power to introduce its own law, although this was likely to be challenged in the High Court by opponents of gay marriage.

A group of MPs from across the political spectrum have redrafted a Same Sex Marriage Bill that will be introduced in the upper house of the NSW parliament in the next session. Mr O’Farrell has promised a conscience vote on the issue, and is the first Liberal leader to do so.

”Submissions in favour of reform came from across the community – parents, clergy, health and mental health organisations, and prominent individuals from all sides. The number and breadth of submissions in support of marriage equality demonstrates that it is only a matter of time before a change in the law occurs. We look forward to making this a reality in NSW,” Mr Greenwich said.

The bill makes it clear it is about the marriage of same-sex couples only. Trans-sex marriages are not allowed, and churches are explicitly exempted.

The bill will also only recognise same-sex marriages from other Australian states, and not those conducted overseas, because of constitutional concerns.

Ms Sharpe will introduce the NSW bill into the upper house, and expects a vote by the end of the year.

”There have been arguments put forward that marriage equality laws were solely for the Federal Parliament and that progressing same-sex marriage is not an issue for the states. For the first time we have a clear statement from a multi-party standing committee that recognises, not just the right of the Legislative Council to debate the issue, but the constitutional basis for the NSW Parliament to pass a same-sex marriage law,” Ms Sharpe said.

Ms Faruqi said: “In the seven months since this inquiry began, six countries have enacted laws to legalise same-sex marriage. I hope these historic steps in NSW will encourage others campaigning for equality, at both the state and federal level, to keep up the fight and make Australia the seventh.”

The chairman of the parliamentary inquiry, Niall Blair, said the volume of responses, with an unprecedented 7500 public submissions made, both in favour and against, highlighted ”the strength of feeling in the community about same-sex marriage”.

The inquiry found the best way to achieve equal marriage rights would be to amend Commonwealth legislation. But a bill was defeated in Federal Parliament last September after Opposition Leader Tony Abbott refused Coalition members a conscience vote.

On Thursday the South Australian parliament defeated a same-sex marriage bill after the Liberal Party refused a conscience vote on the issue because it was uncertain if state law would be overturned in the High Court.

But the South Australian Liberals have said they will change their position if the NSW inquiry found it was likely to be constitutional. Victoria, and Tasmania, where a bill was defeated last September, are also watching the NSW Parliament on the issue.

The political push to allow gay and lesbian couples to marry has been made under the ”marriage equality” slogan and an earlier draft of the bill carried the goal of marriage equality in its title.

But constitutional law experts have warned using this term in legislation will only increase its chances of being overturned by the High Court.

Legal experts, including George Williams and Anne Twomey, told the parliamentary inquiry that the best chance for a state law to survive a challenge was to confine its content to ”same-sex marriage”.

In 2004, John Howard’s federal government changed the Commonwealth Marriage Act to explicitly be a union between a man and a woman. Professor Williams says this now creates space for state law to fill the gap and cover same-sex marriage, because it is not dealt with by federal law, so there may be no conflict.