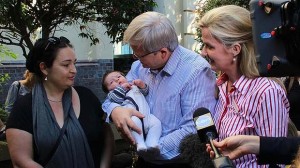 The issue was discussed in policy talks during the new-look government’s first cabinet meeting since Mr Rudd returned to the leadership, with options being pursued about how best to financially help those mostly single mothers affected.

It is being approached from the view of a budget deficit and how the $728 million in cuts could be recouped elsewhere.

But it is understood that some ministers have approached the Prime Minister asking that the issue be given immediate priority.

”Yes, he knows we need to look at this closely and move quickly on it,” one Cabinet minister said. ”He knows that because I am one of them who have told him so. And we are looking at it.”

A member of Mr Rudd’s outer ministry also confirmed approaches had been made personally to the Prime Minister on the topic. This follows a host of backbench MPs publicly and privately expressing anger about the laws implemented by former prime minister Julia Gillard that moved about 84,000 people, mostly mothers, off of single parenting payments and onto the less generous Newstart allowance.

As a recent backbencher himself, Mr Rudd called on Ms Gillard’s cabinet to have ”a bit of heart” when dealing with the single mothers.

Mr Rudd’s spokeswoman would only say that he was ”discussing the issue with colleagues”.

Deputy Prime Minister Anthony Albanese signalled last week that any reverse to the policy would be weighed up against the impact on the budget.