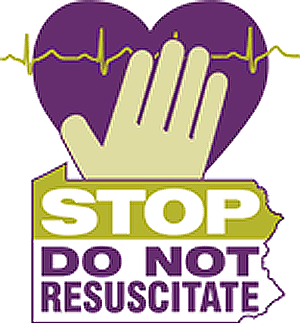 A ‘DNR order’ (Do Not Resuscitate) is a medical order to withhold cardiopulmonary resuscitation (CPR) techniques.

Such an order informs the health care team that in the event of a cardiac arrest, cardiopulmonary resuscitation will not be conducted.1. Measures will then be provided to promote comfort during the dying process.

Given the seriousness of the consequences of a DNR order, various guidelines have been issued in Australia with the aim of supporting health providers, patients and their families during this process.

Most notably, the guidelines emphasise the importance of open and unambiguous communication between the relevant parties. 2

The guidelines stress that a DNR order is to be issued in consultation with the patient, their agent or guardian if applicable, senior medical and nursing staff. 3

In particular, doctors play an important role in the provision or withholding of resuscitation treatment in nearly all situations – where a DNR order exists, doctors play a critical role in assessing its validity; and where a DNR order does not exist, doctors assess whether the patient has capacity to make such decisions, and if not, who is authorised to participate in the making of such decisions on the patient’s behalf.

However, research suggests, somewhat disturbingly, that doctors are not well versed with the laws surrounding DNR orders. 4

This research has revealed that Australian patients are at risk of being killed or saved when they do not want to by doctors who do not understand laws regarding the withholding and withdrawing of life-sustaining medical treatment.

This research was based on a survey of 867 Australian doctors and found ‘‘critical gaps’’ in their legal knowledge that could expose them to criminal charges including murder, manslaughter or assault if they act against a patient’s wishes.

Given the significant consequences of a DNR order and the importance of preserving patients’ rights to individual autonomy and bodily integrity, it is imperative that the medical profession has a sound understanding of this area of law.

Equally important is awareness amongst the public regarding one’s right to make such decisions or appoint substitute decision makers to act on their behalf, and availability of the courts as a forum for dispute resolution should issues surrounding DNR orders arise.

Part 2 and 3 below attempts to shed light on this topic by discussing the laws regulating DNR orders in the various states and territories in Australia. 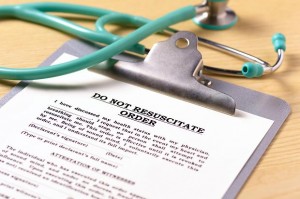 Common law and legislation in some states allow for an individual to make an advance health directive, which effectively informs the patient’s health team regarding the care the patient would like in the future should the patient become unable to make medical decisions. It can cover the withholding of CPR.

The common law and various state legislation governing such a directive are discussed in Part 3. In the event that a DNR order does not formally exist, two possible situations arise.

The patient can refuse resuscitation given the patient is competent and has capacity. This common law right to refuse treatment resonates with notions of protecting an individual’s autonomy. This refusal of treatment will be determinative regardless of whether or not the doctor finds CPR could be beneficial.

The second situation arises where the patient is unconscious or otherwise found not to have capacity to make medical decisions. Such situations are often complicated by the role of the medical profession, who at times play a more active role in advocating a DNR request on behalf of the patient.

In such cases, guardianship legislation in each State plays a vital role. Legislation provides that substitute decision-makers will be involved in the decision-making process. A substituted decision maker could have been either formerly appointed by the patient whilst the patent was conscious and had capacity, or by default mechanisms as specified in state legislation. The ability of substitute decision makers to refuse resuscitation on behalf of the patient is discussed in Part 3.

It is also important to note that in all states and territories, dispute resolution mechanisms exist to resolve disputes surrounding a DNR order. The available forums include the respective State tribunals or Supreme Courts that exercise parens patrie jurisdiction. Parens patrie jurisdiction effectively enables the Court to make decisions in relation to adults who lack capacity.

The law in Australia regarding DNR orders is found in both common law and legislation in the various states and territories. While common law remains constant for all states, the legislation varies.

Any competent adult can complete an advance directive, which can extend to refusing CPR. 5

However, it will only apply if circumstances arise in which the adult intended the directive to apply. 6

Australian states and territories have enacted non-uniform legislation governing DNR orders. The proceeding discussion will focus on laws surrounding a person’s rights and rights of those acting on his/her behalf to refuse CPR in Australia. This paper will focus primarily on laws in Victoria, New South Wales and Queensland and offer a brief overview of the laws in the remaining states and territories; South Australia, Western Australian, Tasmania, Australian Capital Territory and Northern Territory.

The relevant legislation is the Guardianship and Administration Act 1986(Vic) and the Medical Treatment Act 1988(Vic). It is important to note that the legislation does not alter the common law in relation to the provision of treatment that a doctor believes is futile.8

An Adult Can Complete A Refusal Of Treatment Certificate

The Medical Treatment Act 1988 (Vic) 9 states that an adult can complete a refusal of treatment certificate, which extends to refusing CPR. However, an adult’s ability to refuse treatment in such a certificate is limited to refusal that relates to a current condition of the adult.

Whether common law advance directives continue to apply in Victoria remains uncertain. If it does, this would enable an adult to overcome the limitation in the Act by way of an advance directive in common law to withhold CPR, even if such refusal does not relate to a current condition.10

The powers of these individuals in refusing CPR are discussed below.In the absence of the above appointments, the “person responsible” will be the first of the following who is reasonably available and willing and able to make the relevant health care decision; the adult’s spouse or domestic partner;the adult’s primary carer; or the adult’s nearest relative.13

However, it appears that a person responsible does not have power to refuse treatment such as CPR under the Medical Treatment Act 1988 (Vic).

Guardian Appointed By The Victorian Civil And Administrative Tribunal (VCAT)

VCAT may appoint a guardian on behalf of an adult who lacks capacity.14

The relevant legislation in New South Wales is the Guardianship Act 1987 (NSW). It is important to note that legislation does not alter the common law in relation to the provision of treatment that a doctor believes is futile. 18

An Adult Can Complete An Advance Directive At Common Law

The Guardianship Act 1987 (NSW) does not provide for an adult to make an advance directive. Hence, the common law will continue to apply.19

TheGuardianship Act 1987 (NSW) allows a “person responsible” to give consent to medical treatment on an adult’s behalf.20.

A “person responsible” is defined to include a guardian or enduring guardian appointed by the adult or tribunal. In the absence of such appointments, the substitute decision-maker will be the first of the following; the spouse of the adult, including same-sex or de facto spouse; or a person who has the care of the adult; and a close friend or relative of the adult.21.  However, it appears that a “person responsible” does not have power to refuse treatment such as CPR.22

The Guardianship Tribunal in NSW may appoint a plenary or limited guardian.23 Similar to Victoria, the ability to refuse CPR depends on the nature of power conferred to the guardian.

The Guardianship Act 1987 (NSW) allows an adult to appoint a guardian (known as an enduring guardian).24 The ability to refuse CPR depends on the nature of power conferred.

The relevant legislation is the Powers of Attorney Act 1998 (Qld) and the Guardianship and Administration Act 2000 (Qld).

An Adult Can Complete An Advance Health Directive

The Powers of Attorney Act 1998 (Qld) allows an adult to complete an advance health directive, which extends to refusing CPR.26

It is uncertain but likely that Parliament intended the common law surrounding advance directives to continue to apply. The restrictions in Queensland regarding advance health directives are more restrictive compared to the other states. It will only operate if the person has a terminal illness and the person is expected to die within a year, is in a persistent vegetative state, is permanently unconscious, or has an illness or injury of such severity that there is no reasonable prospect that he or she will recover to the extent that life-sustaining measures will not be needed.27

The Powers of Attorney Act 1998 (Qld) allows for certain individuals that are listed in the Act to act as a  ‘statutory health attorney’ of the adult.28

Their powers extend to refusing CPR. A statutory health attorney is the first person from the following list who is readily available and culturally appropriate to exercise power for health matters; a spouse of the adult; adult’s carer; and a close friend or relation of the adult.29

Nonetheless, decisions made by a ‘statutory health attorney’ to refuse CPR will not operate unless the doctor believes the provision of treatment (including CPR) is inconsistent with good medical practice.30

The Powers of Attorney Act 1998 (Qld) allows an adult to appoint an ‘enduring power of attorney’ (EPA) whose powers can extend to refusing CPR.32 However, this power is limited.  It will only operate if the doctor believes that the provision of treatment (including CPR) is inconsistent with good medical practice.33

The relevant legislation in SA is the Consent to Medical Treatment and Palliative Care Act 1995(SA) and Guardianship and Administration Act 1993(SA).TheConsent to Medical Treatment and Palliative Care Act 1995(SA) allows an adult to make an advance care directive, which covers the withholding of CPR. A direction can only operate if the person is in the terminal phase of a terminal illness or in a persistent vegetative state.Similar to the states above, The Guardianship and Administration Act 1993 (SA) provides for the appointment of a guardian by Guardianship Board of South Australia, enduring guardian by an adult, and substitute decision-maker.

The relevant legislation in WA is the Guardianship And Administration Act 1990 (WA). The Act allows an adult to make an advance health directive, which covers the withholding of CPR.Similar to the states above, the Act provides for the appointment of a guardian by the State Administrative Tribunal, enduring powers of attorney or enduring guardian by an adult, and substitute decision-maker.

The relevant legislation in NT is the Advance Personal Planning Act 2013 (NT). The Act allows an adult to make an advance care plan, which could cover the withholding of CPR.

The relevant legislation in ACT is the Medical Treatment (Health Directions) Act 2006(ACT). It allows an adult to make a direction to refuse, or withdraw CPR.